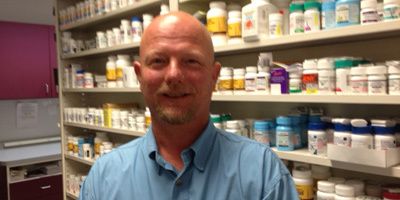 After serving three years in the U.S. Army, Rodger graduated from Temple University School of Pharmacy in 1989. He worked for Peoples Drug Store for two years before joining his father at Minnich’s Pharmacy in Waynesboro. In 1993, he became a partner in the store and in 1999 he purchased the store from his father.

Rodger moved the store to the current location in 2001 and changed the name to Savage Family Pharmacy. He went on to complete his immunization certificate through the American Pharmacists Association in 2011. In January of 2013, Rodger bought Carl’s Drug Store in Greencastle, PA.

In the community, Rodger has served on the Waynesboro Retail Bureau, Cumberland Valley Mental Health, Rotary Club of Waynesboro, and Waynesboro Hospital board. Currently, he serves on the boards of Summit Health, Summit Physician Services, and Quincy Home and Village.

Rodger lives with his wife Hannah and their 2 dogs. They have 2 grown children living in the Waynesboro area. Rodger enjoys hunting, gardening, and spending time with his family.

Shane was born and raised in Chambersburg, PA graduating from Chambersburg Area Senior High School in 1991. Shane graduated from the Philadelphia College of Pharmacy and Sciences in 1997. Shane started working at Rite Aid Pharmacy while attending college and continued with the company as a Pharmacist until coming to Carl’s Drug Store in 2004. Shane received his immunization certificate from the American Pharmacists Association in 2012. Shane still resides in Chambersburg with his wife Kim, daughter Makenzie, son Chase, dog Lexie and cat Sadie. In his spare time Shane likes to spend time with family and friends.

Send Us A Message!